Brexit and the Free Movement of Goods- pending wine shortage?

The European Single Market guarantees the four freedoms: Freedom of Goods, Capital, Services and People. This article will focus on the Freedom of Goods and the implications Brexit will have on this Freedom, such as where our fruit and wine comes from.

Whatever the outcome, what is clear is that things will never be the same again…

The UK joined the European Economic Area in 1973 and the internal market was established in 1992.[1] Being part of the European Single Market allows EU Member States to freely buy and sell goods from one another. The French wine you drink, the Greek olives you enjoy and the Polish deli meat that’s in your sandwich… yep, they all benefit from the perks that the Single Market makes possible: the freedom to move these goods from border to border without any restrictions or extra charges.

On 23 June 2016, the British public made a historic decision to leave the European Union which will have a significant effect on the free movement of goods.

The following is a summary of the free movement of goods which may raise a few eyebrows. Tweet us if you’re Brexit ‘Yay’ or ‘Nay’.

The Single Market is defined by economicsonline.co.uk as “a formal arrangement between sovereign nations to allow Members free access to each other’s markets”. Allowing manufactures to trade without tariffs encourages increased competition by essentially giving a level playing field for all manufactures. As there’s no discrimination on goods which are domestic or imported, it drives prices down for goods which benefits the consumer in getting the best prices. This basically means you get the best priced sausages for your brekkie!

UK businesses also have access to other markets allowing them to sell their goods, such as mechanical machinery and cars which are produced in the UK. This means that UK producers also have the benefit of having access to export and sell their goods in other Member States.

It also encourages manufactures to invest in the UK to take advantage of the free movement of their goods into other markets. The Financial Times reported in January 2019 that investment in UK companies has fallen for three consecutive quarters in light of the Brexit vote.[2]

Alternatively, many Brexiters argue that the UK, as a sovereign state, should be able to control its own tariffs and customs. Having the freedom to negotiate its own independent trade deal with countries from the rest of the world may pave the way for new relationships and opportunities.

The Single Market encourages the division of labour, allowing goods to be moved to areas where they are needed and allows producers to geographically target markets they can export to. This means, when you are in need of your orange juice in the morning, but the fruit is not in season in the UK, we are able to import oranges from sunny Spain to get our fix.

Many restaurants in the UK, be it chains or independent businesses, benefit from the Single Market since their goods are imported from other Member States. So, unless trade deals are struck with these countries, the food we eat and the imported wine we drink whilst on a fancy dinner date may be a little more expensive than we’re used to due to businesses in the UK having to pay more for them.

Businesses here in the UK can also benefit from this division of labour by exporting their goods to where they are demanded without any barriers to trade.

The EU has strict regulations on imported goods that are sold and produced in the EU. Food in particular is heavily regulated.

Regulation (EU) No 1169/2011 forces producers to label their food in a certain way. The EU aims in turn to make the allergens in a product clearer by not only listing them but also placing emphasis on font, style and background colour. The EU also has a prohibition on chlorinated chicken from the US. This may result in the food that is currently sold in UK stores and imported by businesses will have a different criterion to satisfy than is presently the case under EU law.

Theresa May’s government have denied there will be a lowering of food standards, but only time will tell.

To ensure that there is an agreement governing the UK’s relationship with the EU once the UK leaves, a deal must be agreed between both the UK and European parliament. This deal would cover the free movement of goods once the UK leaves the EU.

Even when the UK leaves the EU, goods exported and sold into the EU must meet the EU requirements to protect human, animal health and consumer rights.[3]

Without a deal, the UK will leave the European Single Market and will be classed as a ‘third country’. This means that the UK, as a third country, will be subject to other countries’ trade rules such as[4]:

However, they don’t call us Great Britain for nothing, will the UK really crumble after Brexit? We must consider the successful trade deals that the UK already has with non-EU members such as China and the USA. US President Donald Trump has commented the “very good trading relationship [between the UK and US] has been strengthened further”[5].  The government is keen on negotiating with America after the UK leaves the EU. However, there is still a long time to go as only 4 out of the promised 40 trade deals have been signed.[6]

Non-EU Member States can still benefit from various degrees of participation to the Single Market if they are part of the European Economic Area (EEA) Agreement. These countries include Lichtenstein, Norway and Iceland.

The Switzerland-European Union Agreement allows Switzerland, who is not part of the EEA, to participate in the Single Market. Switzerland has over 100 bilateral treaties with EU integrating both economies which essentially means Switzerland has no regulatory autonomy.

However, as demonstrated in the image below, the UK does not want to emulate the deals struck with these countries due to the “UK red lines”, one of which being the UK does not necessarily want the four freedoms, particularly the Free Movement of People. Therefore the only option is to have a bespoke agreement which the UK needs to strike with the EU which is likely to be limited in regulation and access, similar to the “EU-Canada Comprehensive Economic and Trade Agreement”. But any agreement of this nature is yet to be drawn up. 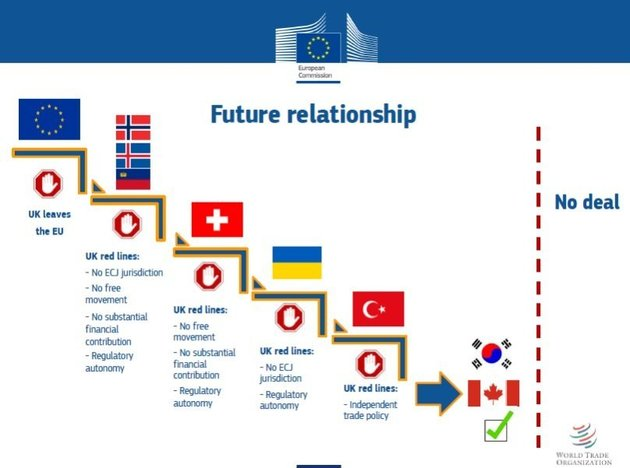 Many MPs are not willing to leave without a deal which has caused significant delay and extensively long negotiations between MPs and between the UK and EU. A final decision is yet to be made and with the March 29 2019 deadline approaching (although an extension has been requested) the future looks uncertain.